Written by TurnKey Promotions on August 10, 2018. Posted in Marketing 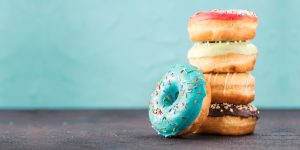 It seems like every other day is something-day. On the 10th of August, we had Duran Duran Appreciation Day and World Lion Day, Photography Day on the 19th, Be An Angel Day on the 22nd and Dog Day on the 26th.

Increasingly smaller holidays and events are being used to sell an array of products. An appropriate approach is vital. Done right, a holiday or celebration can be the perfect way to boost sales and create a strong brand association, but done poorly and the effort can appear transparent and tacky.

The most straightforward and most suitable instance of tying into any given x-day is when the product is inextricably tied to the day in question. National Donut Day, the 1st of June, is something of a no-brainer for Krispy Kreme, who mark the day by offering a free donut to every customer. It gets feet through the door and nets a tidy little profit to boot.

Greetings card companies stock their shelves with every kind of Birthday card imaginable, and deck their halls with the pinks of St. Valentine or the greens and reds of the festive season. There’s an undeniable and well-ingrained link in these industries and products. People may complain every year that they’re being inundated with Christmas-this and Halloween-that, but they buy it all the same. You’ll see dad rock albums climb the charts in the run up to fathers day and florists will beam when mothers day rolls around. It depends on the holiday, but when the link is clear and established marketing to a day or holiday can make sense.

In the bigger markets, Christmas in particular, where so many products and services are vying for consumer attention, the question actually becomes less of a ‘should we’ and more of a ‘how do we’. A common marketing ploy is to play on cultural associations. Coca-Cola’s Christmas campaigns have been wildly successful because they so effectively capture classic images of Christmas. Families around open fires, the mad dash for last minute presents … all of it wrapped up in a cosy, wholesome family image. They’ve even helped to define the modern day image of old St. Nick (though contrary to popular belief they weren’t responsible for turning his suit red http://news.bbc.co.uk/2/hi/uk_news/magazine/7152054.stm). Coca-Cola though, especially in the cold December climates of the US and Europe, hasn’t got a whole lot of relevance to Christmas.

Whilst Coke have managed it, products being advertised and associated with events that they share no link with can also be a big misstep. Cynical and irrelevant marketing will only cause annoyance. Sticking with a festive theme, the UK-based supermarket Sainsbury’s tied into the hundredth anniversary of the First World War in their 2014 advertising campaign, to a fair amount of scorn from the press and public. Trying to sell groceries with images of one of humanity’s most horrific conflicts is a tenuous link at best and downright offensive at worst.

Here in Australia many will be familiar with Meat and Livestock Australia’s controversial lamb advertising campaign, which utilises controversy around Australia Day to drum up interest. These sorts of controversial campaigns can be very hit and miss, and those that do succeed often do so by means of leaning into more out there and incongruous forms of advertising. Dick Smith Food’s own (https://www.youtube.com/watch?v=h7y6iE0aB5s) Australia day advertising plays off of absurd notions of patriotism and the inherent irrelevance of the product to the day itself for comedic effect. However it does also feature some pretty obnoxious casual racism. If you’re planning to use a holiday to sell something that has very little business being associated with it, recognising this inconsistency and playing off it is the best way to go. Tenuous association and causing offense in a needless and tasteless fashion is not.

Tying your marketing to a specific day, season or holiday can be a great way to drum up interest. If your product or service has a very clear link it’s an opportunity that shouldn’t be missed. Did you know the 1st of June was Donut Day? You probably didn’t until every cafe had a sign in the window informing you of it. Drawing attention to these fun little events is an easy and relatively risk-free form of marketing. When dealing with the bigger hitters, Christmas, Easter and the like, it comes down to the suitability of the product and its ability to stand out from the crowd.

Our 10th Anniversary celebrations were coming up and the management team wanted a unique gift for each staff member to celebrate. TurnKey Promotions were fantastic in providing creative ideas and making it happen within a very short timeframe. All went very well and the staff were really happy with the surprise gift.